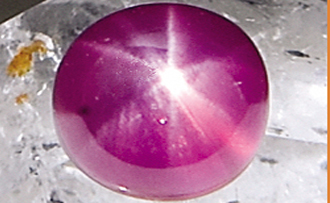 Ruby is a red variety of corundum, an aluminum oxide with a hardness of 9. Its crystal system is hexagonal (trigonal). It forms in prismatic, tabular, bipyramidal or rhombohedral crystals. It can also occur in granular or massive habits. Until 1800, when Ruby was recognized as variety of corundum, red Spinels and Garnets were also believed to be Ruby. The intense red color of Ruby comes from chromium. In some Rubies, inclusions of titanium oxide cause light diffusion in cabochon-cut stones that can appear as a six-pointed star. Rubies have been mined in Sri Lanka, Burma, Thailand, India, Brazil and the United States.

Ancient legend in Burma held that inserting a Ruby into one’s flesh would make one invulnerable. In European lore during the Middle Ages, Ruby was believed to convey good health, resolve disagreements and remove negative thoughts. It was long revered as a stone of royalty, and the Chinese Emperor Kublai Khan was said to have offered an entire city in exchange for a huge Ruby.

robert simmons Rubies emanate the pure Red Ray with a vibrancy unsurpassed in the mineral kingdom. They are powerful tools for stimulating the root chakra and bringing additional life force and vitality into one’s being. Wearing Ruby has the effect of energizing and activating one’s physical, mental and emotional bodies. Rubies enhance one’s passion and fortitude, allowing for the wholehearted pursuit of one’s aspirations. They eliminate feelings of hopelessness or defeat from one’s thoughts, and they open the wellspring of optimism and determination needed to accomplish difficult goals. They impart a feeling of power to the wearer, improving self-confidence and adventurousness.
Rubies vibrate with an enthusiasm for life, instilling an openhearted willingness to make whatever leaps of faith are required to move forward. If one feels stuck in any sort of rut—in career, in relationships, or in one’s spiritual path—Ruby can provide the energy to get things moving. This stone is a magnet for novelty and adventure. Its vibrations seem to attract opportunities for unexpected shifts of scenery and/or situation. When you wear or carry Ruby, it is as if the synchronicity angels can see you better, and they send you more beneficial surprises. And for those who tend toward timidity and ‘security,’ Ruby prompts you to say yes before you can think of a reason to say no.
Ruby is a stone of courage. It assuages doubt and assists one in dealing with anxiety. It helps one become comfortable with the unknown and teaches one not to fear death. Ruby’s message is “Better to die than not to live.” With its magnetism for novelty and synchronicity, Ruby often brings one into situations in which one must face old fears. (Think of rock climbing, parasailing, public speaking, etc.) Yet it also teaches one to enjoy the thrill of such confrontations. Courage, after all, is not the absence of fear—it is moving forward in the face of fear. Ruby inspires you to keep going.
Ruby inspires the protective aspects of one’s character. It encourages one to step forward and stand up for those who are threatened, whether they be friends, children, animals, trees, a homeless stranger or victims of war in another country. It prods one to speak truth to power, even when one may feel vulnerable. It compels one to ‘rock the boat’ if the captain is corrupt. Ruby helps you be the kind of person you would look up to.
Ruby harmonizes with Blue Sapphire, which adds self-control to Ruby’s enthusiasm and courage. Proustite, Cuprite and Zincite work with Ruby for increased enhancement of life force. Rose Quartz and Morganite lend romance to Ruby’s fierce passion.

naisha ahsian Ruby carries the frequency of the enlightened base chakra. It stimulates the flow of life-force energy or chi through the body, strengthens one’s ability to meet one’s needs and manifest one’s desires, and can be a catalyst for the activation of the kundalini.
Ruby is a traditional prosperity stone. It assists one in meeting one’s needs on all levels of being and is particularly good at attracting wealth. It stimulates sexual energy and desire and can aid one in overcoming sexual dysfunction and some types of infertility. Ruby assists in connecting one’s energy field to the Earth, allowing one to replenish one’s energy stores. It is excellent for grounding and can be used to counter spaciness, dizziness, and other symptoms of energetic overload. It is an excellent support in times of stress or when one must go the extra mile before having the opportunity to rest.
Ruby speaks of the sensual pleasures of life—of beauty and the expression of one’s creative energy. It is a powerful stone for those who are trying to develop a more loving attitude toward their physical bodies and can be a great help in regulating the metabolism. Ruby can assist victims of sexual abuse to heal their connection to their bodies. It encourages one to express love for oneself by taking care of the physical vehicle. For this reason, it can also be a great support for those who are in recovery from addiction or self-abuse.

Star Ruby
Star Ruby is a pure expression of the Light of Spirit as it is grounded through the first chakra and the Earthstar. The Light of the Soul is reflected in the striking starburst created by light diffracting within the stone. This Light is then grounded within the Ruby, so that it can be integrated and expressed through the more mundane aspects of one’s life. This direct manifestation of spiritual Light through the first chakra makes Star Ruby a powerful stone for tantric work and  manifestation. It is a stone for embodiment of Light and can be used by Light workers and healers to integrate high-frequency energy into the body.
Star Ruby reflects the manifestation of Light into the Earth plane and can assist one in perceiving the true abundance in one’s life. Star Ruby can be valuable in shedding Light on the root causes for sexual dysfunction and healing past sexual- or power-abuse trauma.
spiritual Ruby teaches one to enjoy being in the physical world. It helps one perceive the spiritual energy that exists throughout the realm of matter, and offers lessons in mastering the transformation of thought and intent into physical manifestation. Ruby helps one release the physical imprint of past emotional trauma or physical abuse from the cellular record.
emotional Ruby is excellent for those repelled by being in a body in the physical world. It can help one feel more engaged in life and more loving toward one’s physical body and human existence.
physical  Ruby is an excellent healing stone for the first and second chakras. It can be used to treat inadequate circulation or energy flow in the feet and legs. It is often used for treatment of sexual dysfunction and infertility. It can be used to assist in weight regulation, particularly where excess weight is held in the body in order to ground one in the physical world.
affirmation  I embrace my life with fierceness, passion and the courage to accomplish all that I will to do.