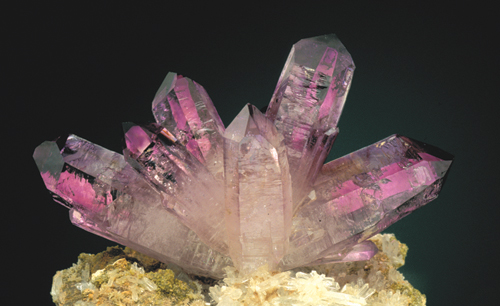 Amethyst is a member of the Quartz family with a trigonal crystal system and a hardness of 7. Its color, which varies from pale to deep purple, is derived from the combination of trace amounts of iron and aluminum, plus natural or applied irradiation. Amethyst crystals and gem rough are found in num-erous locations throughout the world including Brazil, Bolivia, Mexico, Africa, Canada, Russia, the usa and Europe.

Amethyst has been prized for its beauty and its legendary energies for thousands of years. Neolithic people in Europe used it at least as early as 25,000 b.c., and in ancient Egypt it was made into beads and amulets. Early Greek and Roman societies placed high value on Amethyst, and it has long been viewed as a stone of royalty, utilized in crowns, scepters and the rings of bishops. Amethyst is said to have been the ninth stone in the breastplate of the high priest of Israel, and one of ten stones upon which the names of the tribes of Israel were engraved. Amethyst’s name comes from a Greek word meaning ‘not drunken,’ and an ancient Greek myth explains its derivation: The god Bacchus, angry because of an insult, decreed that the first person he met would be eaten by his tigers. The unfortunate person happened to be Amethyst, on her way to worship at the shrine of Diana. When the tigers

sprang, Diana transformed the girl into a clear, transparent crystal. In remorse, Bacchus poured the juice of his grapes over the stone as an offering, thus giving the gem its beautiful purple color. The Greeks believed that Amethyst would prevent intoxication, calm anger and relieve frustrated passion.

Robert simmons It is interesting to see how many of the spiritual properties attributed to Amethyst in past centuries are similar to those which have been intuitively discovered in recent years. Indeed it is appropriate to view Amethyst as a stone of spiritual protection and purification. It can be an aid to curbing overindulgence and giving up bad habits. It can be used to assist one in quitting smoking, drinking or drug use. It stimulates the crown chakra and is an aid to meditation, helping one to still one’s thoughts and move into higher states of consciousness. It can clear one’s energy field of negative influences and attachments, and can thereby facilitate the creation of an energetic ‘shield’—a field of spiritual Light around the body that wards off the negativity in one’s environment.
Those familiar with the St. Germaine stories may remember the legendary ‘violet flame’ of spiritual purification which readers and disciples were urged to call upon to purge themselves of karmic baggage or illness, and to protect themselves from psychic attack. This is a direct analog of the subtle vibrational field emanated by Amethyst, and it can assist one in connecting with this beneficial energy.
Amethyst is an ideal stone for enhancement of one’s physical environment. Placing Amethyst clusters, geodes or crystals in one’s home, meditation room, car, etc., can bring the feeling that one is surrounded and protected by a ‘bubble of Light.’ For this reason Amethyst is an especially recommended stone for everyone from healers and psychologists to teachers and truck drivers. If one is ill, placing an Amethyst specimen in one’s room can help keep one’s healing space clear. Wearing Amethyst maintains the inner space of one’s body and energy field in a state of balance and well-being. In all cases, one is advised to clear the energies of one’s Amethyst pieces from time to time. The easiest method is to hold the stone under running water for a minute or less, while affirming the intention that the stone be cleared.

For spiritual protection, Amethyst works especially well when combined with Moldavite. Amethyst generates its characteristic ‘bubble of Light’ shield, while the Moldavite raises one’s vibrational frequency to a level at which one simply doesn’t resonate with the lower energies of negative entities or dark forces. The spiritual connection provided by Amethyst is greatly enhanced by stones such as Azeztulite, Phenacite, Scolecite and Natrolite. Amethyst also harmonizes with all varieties of Quartz, including Citrine, Smokey Quartz, Clear Quartz, Chrysoprase, Opal, Tiger Eye and all types of Chalcedony. Sugilite and Amethyst together are the best pair for releasing addictive behavior. Other stones which enhance Amethyst protective qualities include Black Tourmaline, Healer’s Gold (Pyrite/Magnetite), Obsidian and Jet.

Naisha Ahsian Amethyst is one of the first stones to which people are attracted when beginning their work with the mineral kingdom. Its beautiful purple Light combined with its high, sweet energy makes Amethyst a necessary item in any Lightworker’s tool box. Amethyst is a cardinal Wind element stone. The Wind element stimulates the mind, the intuitive and psychic abilities, and one’s connection to the spiritual realms. Amethyst embodies all of these properties, making it a powerful tool for spiritual expansion and cognitive understanding.
Amethyst is a classic meditation tool. Its energy allows one to easily enter into a meditative state and to maintain conscious awareness while in communion with the Divine.The vibration of Amethyst stimulates the higher mind and facilitates brain function. Because of its ability to stimulate the third eye, crown and etheric chakras, Amethyst is a natural choice for psychic opening and intuitive work. Its inherent high frequency acts as a barrier against lower energies, making it a valuable protective tool for those doing psychic or intuitive work. Amethyst’s energy builds a cocoon of Light around one’s aura, creating a powerful resonant field that helps one remain clear and centered while staying open to spiritual direction and intuitive information.
Amethyst’s ability to activate the higher mind allows one to gain a clearer comprehension and understanding of the dynamics and root causes of life experiences. Due to this enhanced clarity and balancing of the mind and thought, it can be useful in assisting one in overcoming addiction by counteracting the effects of drugs on brain function while imparting its own peaceful, blissful energy. Amethyst assists in eliminating emotion-based decision-making, allowing one to take actions based on higher guidance and spiritual understanding.
In healing work, Amethyst helps one understand the root cause of one’s disease or imbalance. Its ability to lend clarity assists one in identifying the damaging beliefs, behaviors and habits that brought an energetic imbalance into the physical realm. It reveals one’s ego-driven self-destructive patterns and the root experiences behind them. It helps one take responsibility for one’s reality by reminding one of our co-creative relationship with the Universe.
Spiritual Amethyst facilitates meditation and engenders communion and communication with one’s guides and angels. It assists one in surrendering to the Divine and assuming one’s spiritual power as a creation of that Divine being. It opens and clears the third-eye and crown chakras, which in turn accelerates the development of intuitive and psychic abilities.
Emotional Amethyst can help one identify the root causes behind behaviors, habits and emotional patterns which create imbalance and disease. This powerful ally assists one in recognizing one’s response-ability as a spiritual being having a physical experience. It can help those who are prone to disassociation or playing victim to recognize their inherent power and their ability to align their physical reality with their spiritual purpose. Amethyst is helpful for those who do not feel that they are native to the Earth plane, or who experience a constant longing for a ‘home’ on other worlds, systems or dimensions.
Physical Amethyst has traditionally been used to counter addictive behavior and thought  patterns. It lends clarity of mind and makes it more difficult for alcohol, drugs and other addictions to alter one’s mood. It helps balance the nervous system and the brain. It can be used to help with symptoms of tinnitus, nerve disorders, or brain imbalances. Amethyst’s energy also supports oxygenation in the blood, helping to improve the body’s assimilation of oxygen and the elimination of waste gasses, especially when in combination with other high-iron content stones such as Hematite or Magnetite.
Affirmation    I am purified, uplifted and protected through my connection with the Divine.